Understanding the role of G-quadruplexes to find new therapeutic approach

The research project led by Pr Adrian Isaacs, Department of Neurodegenerative Disease, Institute of Neurology at UC, was selected in 2013.

During the annual scientific meeting of the Foundation before ENCALS, he presented the progress of his work financed by the foundation (160 000 Euros for 2 years).

Based on this research, the team  recently published an invited review on a special issue of FEBS Letters, summarizing the most recent findings about the multiple roles that G-quadruplex structures play in both neurodegenerative diseases and within non-coding transcripts.

A mistake in the C9orf72 gene was found in 2011 to be the most common cause of amyotrophic lateral sclerosis (ALS); but it is not known how this mistake gives rise to ALS.

The type of mistake in the gene is very unusual, it involves a small string of DNA letters at the beginning of the gene, which expand massively, from being a few copies with the code GGGGCC to many copies of this six letter code up to thousands.

DNA sequences that are rich in the letter G can form highly stable chemical structures called ‘G-quadruplexes’. These unusual structures can be involved in many processes including those to make a related chemical called RNA, which is needed to make proteins and those to process that RNA in various different ways to help the cell function normally. This has profound implications for how ALS may be occurring, through having these strange chemical structures in the cell. Pr Isaacs analyses how this ‘repeat expansions’ causes motor neurons to die. 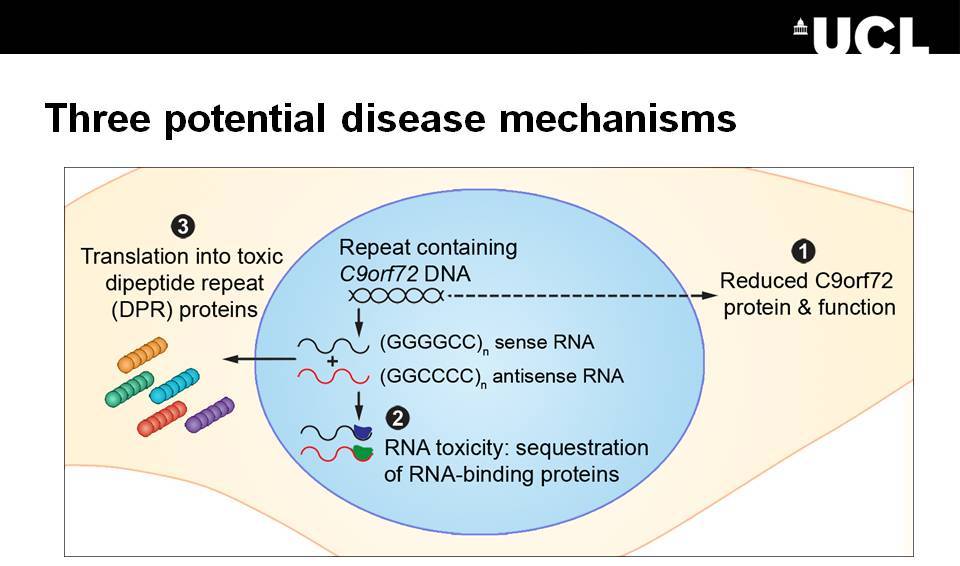 1) The repeat expansion leads to a decrease in the normal levels of the C9orf72 protein. If C9orf72 has an important role in helping neurons stay healthy, then reducing the amount of C9orf72 could lead to motor neuron death.

3) Finally, the GGGGCC repeats get translated into 5 different proteins. These proteins are not normally produced in the cell and have toxic effects which could eventually kill motor neurons.