Nanobodies show a potential to target and antagonize EphA4

Publication of the project : EphA4 inhibition as a therapeutic strategy for ALS

Laura Rué, member of the Research team, presents the interesting results recently published in the Journal of Biological Chemistry 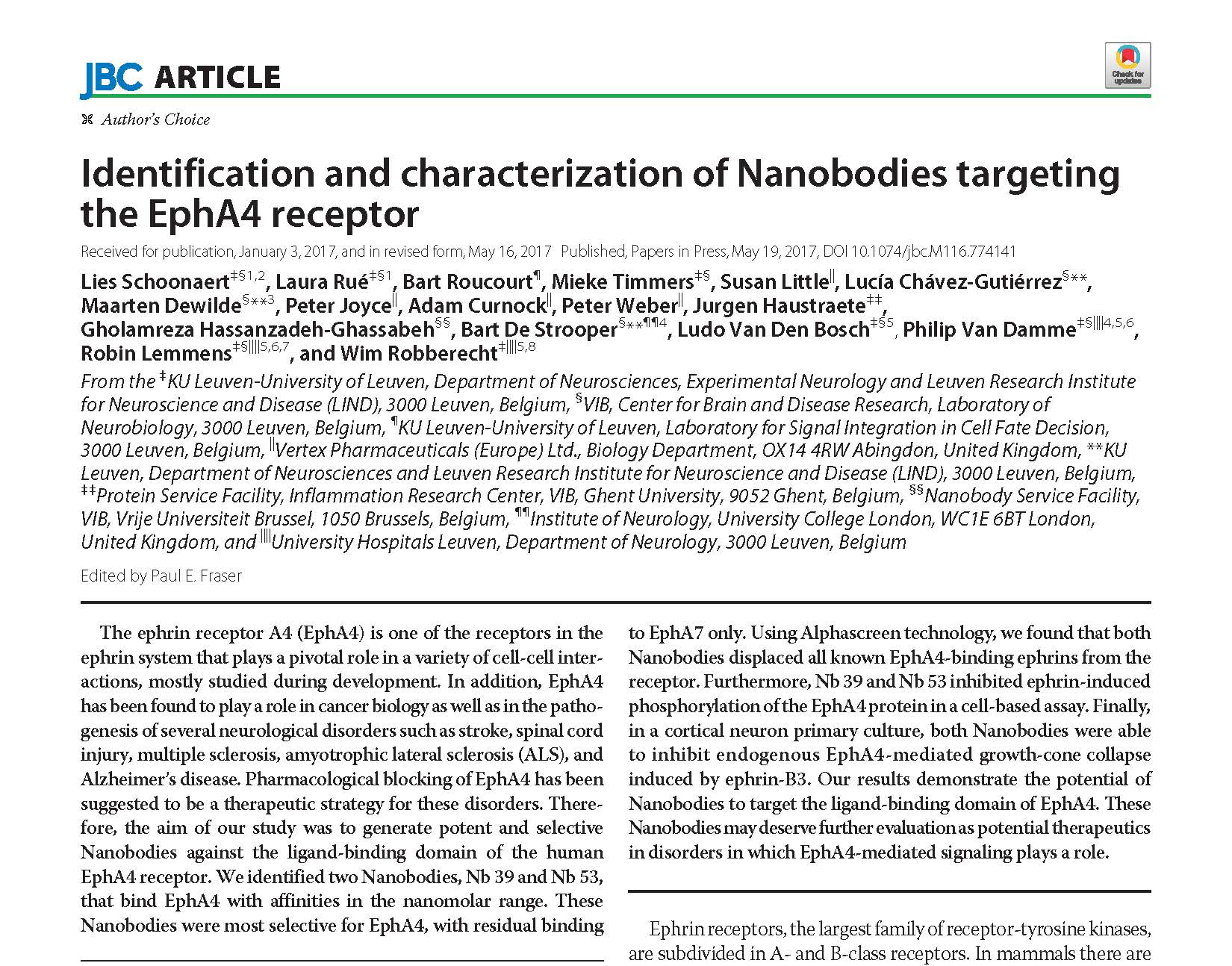 EphA4 is a tyrosine kinase receptor of the Eph-ephrin system that is involved in many different processes during development and adulthood. Within the nervous system, it plays an important role in neurogenesis and neuronal migration, axon guidance, and synaptic plasticity among other functions. EphA4 also plays a role during disease processes, and antagonism of it increases functional recovery of different disease mouse models of spinal cord injury, stroke, Amyotrophic Lateral Sclerosis (ALS) and traumatic brain injury. In our laboratory, we focus on the role of EphA4 in ALS since our previous research showed that EphA4 is an ALS disease modifier in different disease models, and high levels of the receptor are associated with earlier onset age and shorter survival in ALS patients.

For this reason, in the recent publication by our laboratory (Schoonaert et al., JBC, 2017) we aimed to develop a therapeutic approach based on the antagonism of EphA4 by targeting the ligand-binding domain of the receptor and therefore preventing ephrin ligands to bind EphA4 and activating the receptor. In collaboration with the Nanobody Service Facility and the Protein Service Facility (VIB, Belgium) we produced small peptides, called Nanobodies, against EphA4. We found that two of the produced Nanobodies were able to interact with human and mouse EphA4 protein with high affinity, although they could also slightly interact with EphA7. Our results also showed that these two Nanobodies were capable of preventing the binding of ephrin-ligands to EphA4 receptor. Interestingly, we observed that our Nanobodies could inhibit EphA4 phosphorylation, which happens just after its activation by an ephrin ligand. One important function of EphA4 is axon guidance, and this function occurs at the tips of the axons in structures that are called growth cones. Growth cones are capable of sensing stimuli from the extracellular environment, which can make them keep growing or retract. Stimulating neurons in culture with an ephrin ligand can make these growth cones retract, an effect that is EphA4 specific. Our nanobodies were able to inhibit this phenomenon, indicating that they are not only capable of binding EphA4 but also of inhibiting it and its downstream signaling cascade.