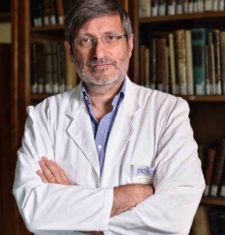 is a neurologist currently working in Torino, Italy. He is Professor of Neurology and Director of the ALS Center at the University of Torino and the Città della Salute e della Scienza Hospital, Torino, Italy. He is director of the ALS Expert Center in Torino, that aims for optimal diagnostic work-up, care and treatment for patients with ALS and other motor neuron diseases in Piedmont. He leads the Italian ALS Genetic (ITALSGEN) Consortium. Adriano Chiò, whose main areas of research are epidemiology, cognition, neuroimaging, and genetics of ALS, is best known for his research on risk of ALS in soccer players, the phenotypic heterogeneity of ALS and has contributed to the discovering of several ALS genes, including C9ORF72, VCP, MATR3 and KIF5A. He has published over 330 papers in peer-reviewed journals. He was awarded the 2015 Sheila Essay Award, presented by the American Academy of Neurology and ALS Association (USA).